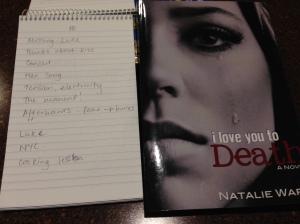 I recently came across a notebook that I thought was empty, but when I opened it up I discovered it actually contained my very first notes on I Love You to Death. Although the notes were short, they not only outlined every chapter of the book, but every scene within those chapters too. And although I’m a “wing it” kind of writer who never writes in order, I do make notes so I can at least have some idea of what’s going on inside my head.

Anyway, finding these notes was interesting reading and it was amazing to see all of the things that had changed and all of the things that had stayed the same. Take, for example, the page in the photo. This is the initial outline of Chapter 10 or A Perfect Ten as I called it. As you can see, there’s plenty that stayed the same: the concert, her song, tension & electricity and *swoon* The Moment! But there was one thing that changed: NYC.

Initially, I planned on sending Ash and Luke to NYC for a dirty weekend after they’d finally gotten together. In the early days of writing though, this got bumped and actually ended up in Luke’s book I Love You, Always. It was replaced with the whole band going to Cape Cod for a week, which of course also features in Mia & Jared’s book, Stubborn Love.

This is what happens when I try to write 3 books at the same time. Three books that all run simultaneous timelines…both on the page and inside my head. Honestly, it’s a wonder my head doesn’t explode sometimes. And while we’re on that, right now I’ve got about 6-8 storylines going through my head, only this time, they’re all going in ONE book! But more on that later…

Anyway, the point of all this rambling is that finding these notes made me smile. I Love You to Death was my first ever book and to say I had no idea what I was doing, is an understatement. But then so many of you loved it and that made me smile even more. So I thought why not make someone else smile by offering them a signed copy of I Love You to Death.

As usual, all you have to do for a chance to win the signed copy is comment on the Facebook post I made about it. Make it interesting or funny or whatever, I’ll pick a winner next week sometime. Open internationally and as always, nothing to with Facebook, blah, blah, blah.